Hope is Now: What Time Is It? 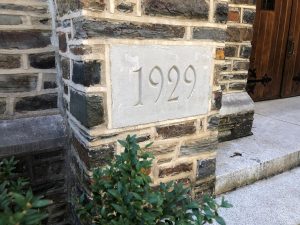 Haggai isn’t a name we use much nowadays. Back in Israel, it was a happy name, meaning “feast day.” Maybe he was born on one! He grew up during Israel’s darkest days, the nation uprooted, living in exile hundreds of miles from home, the economy in shambles, hope shrunken. Surprisingly, Cyrus the Persian conquered the Babylonians and decreed that Israel could go home.

Their joy in their return shriveled quickly. Jerusalem was reduced to rubble, every single block looking like Ground Zero in New York after 9/11. Jackals prowled what used to be the temple. The crops failed. The people barely scraped out a living.

Haggai received a strange word from the Lord – one he must have known would make his listeners uncomfortable, which is the feeling we get today. The Lord has heard the people say the most practical thing possible: “The time has not yet come to rebuild the house of the Lord” (Haggai 1:2). The Lord counters: “Should you dwell in your paneled houses, while this house lies in ruins? Consider how you have fared. You have sown much but harvested little. You drink but never are full. You earn wages and put them into a bag with holes. Go, bring wood, and build my house.”

Haggai’s logic? Was it really the Lord’s logic? Or did Haggai mis-hear? The people say “Because times are hard, there is no time to build the temple,” but the Lord says “It is because you have no time for the temple that times are hard” – as if they have the cause and effect backwards! Haggai’s prophetic word is If you put God first, instead of last, even if it’s costly to you, then you will be blessed, then your fortunes will change.

This feels, to me, sort of true. If your kids don’t have food, you probably should feed them before you fund a temple. But generally, we may say God is #1 – but our real priority is me, mine, my family, my work, even my diversions. God’s given some space and time, God’s squeezed in there. But our real quests are not for God – but then we wonder why we’re spiritually hungry, kind of hollow in the soul, our prayers not feeling like they matter all that much.

It’s impossible for me to ponder this moment without recalling the date on the cornerstone of the Church where I serve: 1929. Who in America, in 1929, wouldn’t have had fantastic reasons to say “It is not time to build the Lord’s house yet.” But with remarkable courage and hope, they built, in the thick of the Depression. They were blessed. We are still blessed by their prophetic determination. Interestingly, after Haggai spoke, the nation listened, and built. Nothing lavish – but it was for God. And their fortunes indeed changed for the better.

I think of people I have known who were the sorts of people Haggai – and Haggai’s Lord – dreamed of. God’s the thing. God’s the priority. We simply will go to church, no matter what or where. Our first check, once we’re paid, is to God’s work. My time begins with prayer, and if TV or goofing off fits in, then okay. I’ll volunteer to do God’s work, and if my golf game suffers, so be it. At the end of life, who feels like My gravest flop in life was failing to buy more stuff, to engage in more diversions, to do more for me?

Haggai’s message, to me, seems a bit simplistic. And yet, if you think of it at a national level, putting everything else in order before a focus on God, goodness, character, and serving others might just be why a nation winds up in such an awful mess.