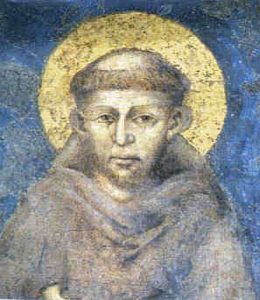 St. Francis of Assisi was a poet, songwriter, balladeer – reared in a church where he would have grown up hearing, chanting, and praying the Psalms constantly. Psalm 148 must have touched something deep within him, probably even when he was a little boy.

“Praise the Lord” is repeated 6 times when we come to a picturesque surprise: “Praise him, sun and moon, praise him you shining stars.” Could sun, moon and stars hear or even notice the Psalmist or St. Francis? Is it merely a metaphor, inviting them to praise? Praise is giving glory to God, making testimony to God’s grandeur. What could do so more eloquently than sun, moon and stars? And we know way more than the Psalmist or St. Francis! The size of the fireball of a sun, and the pinpoints of light in the Milky Way (more visible to them than to us!) have been streaming toward us for thousands of years – at the speed of light! The Hubble telescope and probes into deep space have revealed images that would make the Psalmist’s and Francis’s jaws drop.

The Psalm proceeds to join sea creatures, hail, wind, mountains, cedars, beasts, and birds in praise. They all do. St. Francis preached to some birds, reminding them to sing praises to God, thanking God for trees, worms, the air, their wings. St. Francis devised his own riff on this Psalm, rephrasing and expanding upon it. His fantastic “Canticle of the Creatures”

What astonishes is that Francis wrote this most beautiful of all Christian poems late in his life when he was miserable physically: nearly blind, his lungs riddled with tuberculosis, in constant pain, exhausted, with the only medical attention available being of the medieval sort that did more harm than good. Professionally he was stricken: the friars were bickering, in constant turmoil, showing every sign of the eventual ruin of his movement. Emotionally he was drained.

And yet, instead of sinking into despondency, instead of pleading with God to fix all that was broken in and around him, Francis pleaded with the Lord – not to cure him, but to help him bear his illnesses patiently. God’s reply? Francis “was told in spirit” he would receive a “great and precious treasure,” and a promise to “be glad and rejoice in your illness and troubles because as of now, you are as secure as if you were already in my kingdom.” God could have said “Do you recall Psalm 148?”

Francis grew in gladness. He heard some notes and phrases. His trembling, aching hands took up a pen and began to write: “Be praised, my Lord, for all your creatures. …for the blessed Brother Sun who gives us the day and enlightens us through You… Be praised, my Lord, for Sister Moon and the stars, formed by You so bright, precious, and beautiful.”

We think of nature as something photogenic, or as something to be preserved against polluters. For Francis, nature isn’t about us. The sun isn’t something we hope will come out from behind the clouds so we can enjoy the ballgame. The sun is my brother, a ball of light and warmth God holds up there to give life and mark the day. The moon isn’t something to ignore most nights like the rest of God’s starry host, lost to the ambient, phony light of our cities.  The moon is my sister, precious, fair. Like my children when they were two and three years old, we glance out the window toward the shimmering light, close the book and say “Goodnight, moon.”