Embracing Mystery: The Seal of Truth and Praise 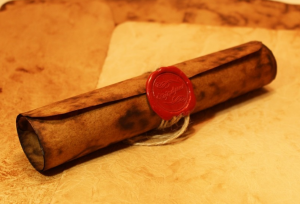 And so we come to the final portion of Paul’s impressive 202 word sentence that began in verse 3 – which has been an extended filibuster on the greatness of God. “In him, according to the purpose of him who accomplishes all things according to the counsel of his will, we who first hoped in Christ have been destined and appointed to live for the praise of his glory. In him you also, who have heard the word of truth, the gospel of your salvation, and have believed in him, were sealed with the promised Holy Spirit, which is the guarantee of our inheritance until we acquire possession of it, to the praise of his glory” (Ephesians 1:11-14).

The clump of verbs, “destined, purposed, appointed, accomplished, took counsel, willed,” shows God’s deliberate, meticulous planning. Nothing accidental or unanticipated with God! God’s goal? That we “live for the praise of his glory.” God sounds egotistical, until we ponder that we are wired for a joy we miss if we aren’t caught up in the praise of God. And it’s simply recognizing reality: if God is God, then what else makes sense than to drop your jaw, sigh, maybe laugh, and sing a hymn? Praise is what you were designed for, and praise is what you’ll be doing forever.

My favorite professor at Duke, Roland Murphy, loved to use the German phrase, Leben ist Loben: “To live is to praise.” Your life itself bears testimony to the greatness of God, as do the trees, rivers, eagles, muskrats, cliffs, oceans, stars and nebulae. St. Augustine taught us that God wants frui (his Latin word for love of enjoyment, the way you love just because you love) instead of uti (love of use, where I love something because I use it to get something else I really want). Praise is frui, not currying favor from God but being still and delighting in God’s greatness, wisdom, mercy and compassion.

Notice that “truth,” the “gospel,” and “salvation” are “sealed with the promised Holy Spirit.” At the Last Supper, Jesus promised he would send a comforter, a teacher, an inspirer, an advocate. The Holy Spirit isn’t a rush of emotion, but a firm, constant reality, giving life, opening your eyes, stirring you to dream and be holier.

It’s the “seal.” The letter of Ephesians would have arrived in Ephesus rolled up with a wax seal with Paul’s signature pressed in to it – to prevent tampering, to guarantee nothing was faked. In our day, with so much spin and double-speak and ideological bombast, how hopeful is it that Paul’s message of glory and hope, of truth and salvation, is sealed, complete, and trustworthy?

Jump into one of our “Mystery” groups tomorrow, Wednesday or Thursday. Just show up in the Zoom room to learn, grow, befriend!